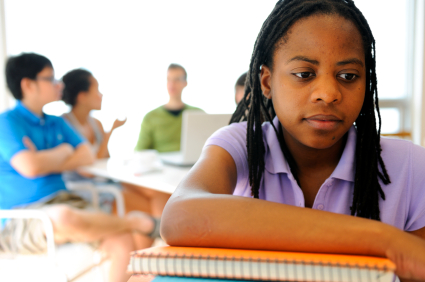 When I was in school I used to be bullied and picked on. I don’t think any of us haven’t been there. I used to hate it! It certainly didn’t make school any easier. Thankfully I was a bookworm who cared only about my studies, but still to this day I think about how being picked on really hurt my self-esteem. At least all of that is past me, but children still have to be subjected to bullying day in and day out. Some think bullying is a right of passage for children and that it’s a fact of life. I think that’s wrong! That’s one of the reasons my husband and I homeschool our children. We’d rather them concentrate on becoming smart young ladies and not have to deal with the haters.

A new study released by the American Public Health Association reports nearly 2/3 of all children have been bullied in the past month. And although it was once believed bullying happened most often where children weren’t supervised, new data shows children are most bullied inside the classroom.

The APHA gathered information from 10,000 anonymous online surveys. The data breakdown is the following:

Resources to Help Your Children Stand Up to Bullies

This book helps girls 8 and up spot bullying, stand up for their friends and stand up for themselves. Utilizing quizzes, what-if scenarios and illustrations, this is a great book to get your daughter thinking and standing up for herself.

From the publisher: Readers will also learn the signs that a child is the victim of bullying. This book will be of interest to all parents and teachers of students in grades K-12.

View all posts by Jennifer James